May is better sleep month. Sleep...I am not sure what that is so don't ask me. I have not had a good night of sleep in over four years. These days it looks like sleep is not going to come for another sixteen at this point. That is if I get the youngest out by eighteen and quite frankly the way he is attached to me, it might be thirty at this point.

Despite my lack of sleep I do try to ensure that my children get a good nights sleep. It has not always been easy. Both of my children are not good sleepers. My four year old, Chase, started boycotting sleep the day I brought him home. The first two weeks of his life he decided that my chest was the best place to sleep. As he got older things did get easier. We still seemed to battle a few bedtime issues and it was apparent that routine and comfort were a vital part of getting him to sleep. 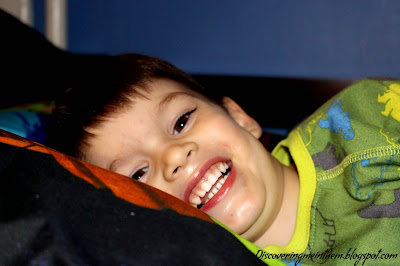 From the very beginning I would rub Chase's  back at bedtime. I distinctly remember him being around two months old when I started this. He would be laying in his co sleeper and I would rub his back. (He was one of those kids that despite what experts say about not letting babies sleep on their belly's, the only way he would sleep was on his belly!) I did this EVERY. SINGLE. NIGHT. As Chase began to talk and transition into a crib then toddler bed, he would request this. Now, at Four years old, we are still rubbing his back each night.

We also have the infamous blanket I recently wrote about in my post His Magic Blanket. This blanket has to be with him each night. We absolutely cannot not lose this blanket as it has been with him since he was born. If I peak in on him at night I may find it clasped in his hand, tucked close to his neck, and even have found it draped over his head. 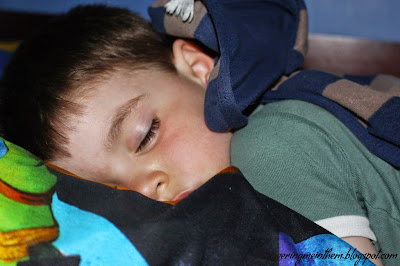 When I first transitioned Chase to a room of his own I invested in a sound machine. We don't use anything fancy but it does the trick. The model we use is the Dex Sound Machine that we purchased on Amazon. I read several reviews before I purchased it. I was looking for a variety of sounds while not breaking my bank. There are several machines out there on the market to choose from. I love the selection of sounds to on this particular one. I have to admit though that we rarely change it and it stays on Ocean setting. I can even hear it from my room and have gotten accustomed to hearing it.

We always turn on a night light. When the sound machine gets turned on so does the light. Chase does not like the complete darkness. A trait he no undoubtedly received from me. I keep a nightlight on in our room as well. The light brings him comfort and if he does get out of bed he at least can see his surroundings and safely move around.

A couple months back we knew it was time to make the transition from toddler bed to "Big Boy" bed for Chase. We wanted Chase to have a part in picking his bed and be excited about his new sleeping space. It was decided that we would get bunk beds since some day Wesley will share a room with his brother. Chase was thrilled about this idea! I started looking at local furniture stores and then online. The search was feeling overwhelming for me. I wanted a nice bed for the boys yet I was faced with not wanting to spend a ridiculous amount of money.

There is a big variety of beds and what seems like an endless amount of places that sell them. The one site I really liked was Wayfair.com. Not only was there a great selection of children's beds but the prices we reasonable and I was able to read reviews before making a purchase. If you are looking for a bunk bed or loft bed they have something for everyone. We found the bed we wanted and Chase was thrilled. He was excited that first night to walk up the ladder of his new bed and sleep on that top bunk. His face lit up and he was giddy. Some nights he even sleeps on the bottom. The kid likes sleeping with his cat who you will find always on the bottom bunk curled up. Having him be excited about where he sleeps has helped to not only make bedtime routines easier, it also has made him stay in bed more and not and come to my room as frequently. 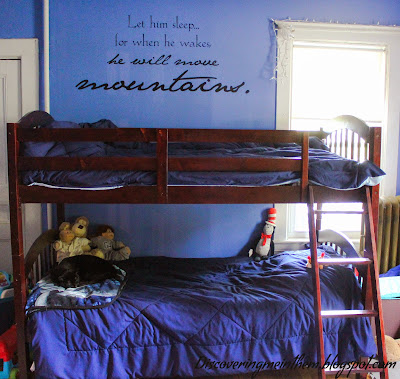 Children are creatures of habit. Creating an environment where your child feels safe, secure, and comforted creates better sleep. Every child is different and each situation is unique. What may work for one may not work for the next. We made the choice to co sleep with our youngest. We are in the process of training him to sleep in the toddler bed and this has not been easy. Wesley does not have a special blanket nor does rubbing his back work. He would rather be as close to me as possible and apparently I am not allowed to get out of bed without him sitting up and screaming.We will figure it out just as he will. Someday I will be standing in their doorway yelling at them to get up for school rather than pleading with them to get to sleep. Until then, please pour me another cup of coffee.


Do you have a special routine that you do with your children at bedtime?


Disclaimer: All content provided by Discovering Me In Them blog is for informational purposes only. All opinions shared regarding products or websites are mine.