Once upon a time there was a new mom who had this beautiful baby boy. Everything was magical. Her heart throbbed with love like she had never felt before. This mama wanted everything to be perfect. She wanted to hold this child in her arms and breathe in the sweet scent of his new skin. She longed to spend her days looking in his eyes and savoring each second of this new found bliss. This is exactly what she had waited for her entire life. This was what she was meant to be: his mama.

I am fortunate that I am now a SAHM. It was decision and a sacrifice we made when I was pregnant with Wesley, our second son. Yet after I had my first son, Chase, I went back to work. I have said it before and I will say it again; it was one of the hardest things I have ever done. Have you ever had that feeling...you know the one... it feels like someone has taken a knife, cut you open, and grabbed your heart out. Only then to drop it right in front of you and stomp on it??!! Yeah, it was something like that! I felt such an emptiness when I left him. I know some of you mama's know exactly what I mean.


In an effort to make the transition easier for Chase, I had read that sending a blanket or lovey, that has the scent of the mother, may help to soothe your child. Chase had received a soft Carters blue and brown striped blanket at my baby shower. Since he was born I would use this blanket to lay over him when he was sleeping or swaddle him when I was holding him.

In the days leading up to bringing him to daycare I started sleeping with that blanket every night. In the morning I would drop Chase off and leave him behind with his blankie. I hoped that the scent of me would linger and comfort him as he napped. Soon he was walking around with that blankie gripped in his tiny hands as he dragged it behind him. We were not able to leave the house without it. If he went to bed and it was not by his side there would be tears streaming down his face. Chase is four years old and that same blanket still is with him every night. If he is sad or hurt he wants his blanket. It is his comfort. 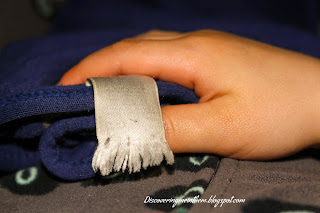 He likes to rub the tag on his blanket. On the nights that I tuck him into bed he will say :"Where's my tag?" I have to find it for him then hand him the tag. He holds the tag in his hand and rubs it between his fingers as he drifts into sleep.

I have to admit I have an attachment to this blanket as well. Just as it gave my son comfort it also brought me solitude in moments when I was  missing Chase. I always made sure he had it with him. One time daddy even dropped him off at daycare and I got the phone call that he forgot it and mama demanded requested daddy go get it and bring it to Chase. Then a month ago it went missing. I had a little boy trying to get ready for bed who was looking everywhere. We searched and searched and the blanket had vanished. Somehow we got Chase to sleep without it that night but we still continued the search finally found it. I was not going to be able to sleep until I placed that blanket close to him, tucked by his neck, the way I find him many nights. Some nights he even has it over his head.

This is not just any blanket, it is his magic blanket. Long after he has stopped sleeping with it, someday when I find it laying on the floor and he no longer asks for it; I will take that blanket and tuck it away. It will go with all the other things will keep to remind me of these days. Years from now I know I will be able to pull that blanket back out and it will give to me what it gives to him right now: comfort.


Does your child have a special blanket or lovey that he/she sleeps with?

Thank you for stopping by and reading! I appreciate the love. Feel free to share!